History of governance in Chippenham

From sparring Saxons to rebellious Geogians, how the town of Chippenham has been run and managed has a long, sometimes turbulent, history.

Explore the timeline below to discover more.

A journey through time...

The Kingdom of Wessex

The origins of Chippenham date back to Saxon times, when it was referred to as a ‘villa regia’, belonging to the Kings of Wessex. As well as being the site of King Alfred’s Royal hunting lodge, it was also the administrative centre for the receiving of rents and dues and would have had a crown-appointed Bailiff to supervise the estate and to ensure that the community did their allotted share of work. With the Lord of the Manor essentially being the monarch, the town largely ran itself and at times paid no taxes to the crown.

Chippenham was also the head of the Chippenham Hundred, a sub-division of the Shires or Counties that largely still exist today. The Hundred would have been able to hold its own court for lesser crimes and it is also possible there was a mint in Chippenham allowing the town to produce its own coins 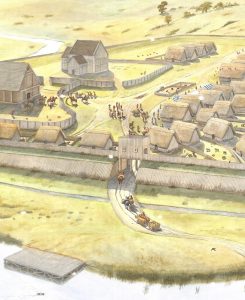 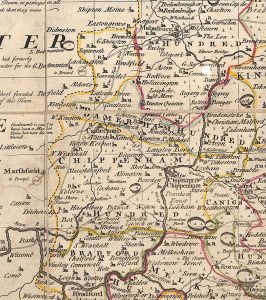 In the Domesday Book, the town is still listed as being under the ownership of the King. However, over the following centuries the lines of authority and power in the town become less clear. The Royal lands were divided up into manors and granted to supporters of the Norman Kings, with only the forest of Chippenham and Pewsham remaining directly in the hands of the Crown. The crests of two of the earliest occupants of these manors, the Gascelyn family and the Hussee family, appear on the towns crest, which is still in use today.

During this period King John granted Chippenham a market and a fair. This was increased to two markets and four fairs under King Edward II. A bailiff continued to provide oversight of the town, but they seem to have found their job a challenge, facing interference from those responsible for governing the town, the manors, and the hundreds. A main sticking point was who was to receive the income from the fairs, markets and rents from the growing Town.

A petition was presented to the monarch to help define the situation. 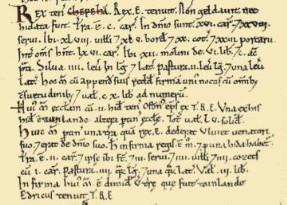 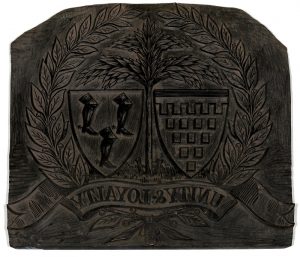 The issues were resolved by the granting of a borough charter by Queen Mary I, in 1554, although the town had been commonly referred to as a borough since the 13th century. The charter laid out how the town was to be governed allowing it to form a council of twelve burgesses led by a bailiff. The first bailiff was Henry Farnewell, alias Goldney, the first of many Goldneys to hold posts in the council. The charter also assigns to the town, the borough lands, from which the council could raise funds to pay for the upkeep of the town bridge and causeway plus two members of parliament.

The charter also mentions the council was to meet in the Yelde Hall, which by this date was described as being “from time oute of mynde”. The Yelde, or Guild Hall, was built around 1450, and may have replaced an even earlier building on the site. As well the meeting place for the council, in the chamber on the first floor, it also was used for court sittings, church entertainments and on market days.

During the civil war the town changed hands several times between the royalists and the parliamentarians, with the borough council having to pay large taxes to each side when then passed through the town. 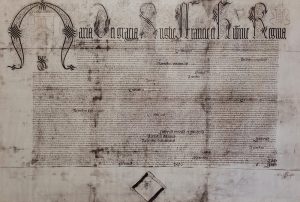 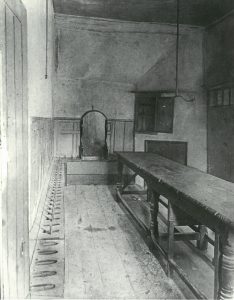 The system of bailiff and burgesses continued throughout the Georgian period. As the town grew, the council began to enforce its rules more strongly. This included trying to suppress drinking and gatherings, such as revels, which were said to lead to drunken behaviour and “all manner of vice, immorality and profaneness amongst the lower classes”.

The borough records also reveal increased criticism of the council, in 1788 a burgess was barred from benefiting from the borough lands for ‘damning’ the council, as was William Spackman for saying the “Bailiff may kiss his arse”.

During this period the council made many petitions to the crown. They petitioned for the abolition of the slave trade in 1814 describing it as “repugnant to every moral and religious principal”. They petitioned again in 1826 to “restore the advantages of Civilisation, Freedom and Religion to a great Portion of the family of Man despoiled of those paramount blessings and debarred the attainment of them.” 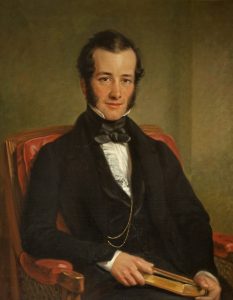 There was large variation in local government administration across the country so in 1835 the Municipal Corporations Act was passed to establish a standard system. A system of twelve councillors and a mayor, elected by the ratepayers, was introduced reflecting the roles and systems of town governance that we see today. Although initially in Chippenham, this change was less noticeable as the last bailiff, William Pope, became the first mayor and many of the burgesses also became councillors. The councillors also appointed a number of more senior alderman to also sit on the council.

The reform act also increased the role and importance of the Town Clerk. The clerk took over the role as treasurer for the town finances and importantly had to remain impartial and non-political, being appointed from outside the council members. From 1868 to 1924 the post of Town Clerk was held by Mr F.H. Phillips, said to be the longest serving Town Clerk in the country, holding the post for over 56 years.

In 1841 the council began to meet in the Council Chamber of the New Town Hall. Generously funded by Chippenham MP, Joseph Neeld, the Hall was built in the fashionable Georgian Style, but in the form of older Town Halls with the Council Chamber on the First Floor and covered market place beneath. The much larger building reflected the growing size and status of the town since the arrival of the railways. 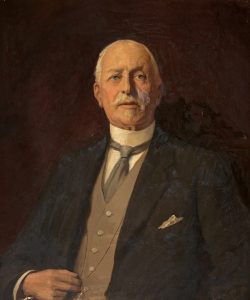 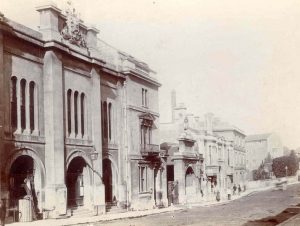 Into the 20th Century

Although women had served as councillors, the first female mayor Mrs Culverwell, was not appointed to the post until 1956. The next biggest step was the Local Government Act of 1972, which saw further reforms to local government. It created the two-tier metropolitan and non-metropolitan county and district council system that largely remains in use today. This saw Chippenham Borough Council abolished.

Its functions and properties were absorbed by Wiltshire County Council and the newly formed North Wiltshire District Council. The continuity of the Town’s charters was maintained by the Chippenham Charter Trustees, whose duties were largely limited to ceremonial activities such as the election of a mayor. 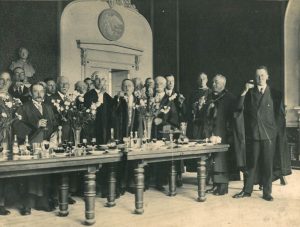 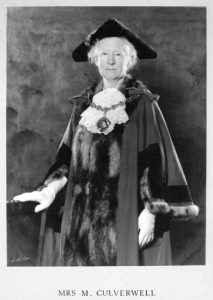 Chippenham Town Council now forms the second tier of local government, after Wiltshire Council. The council is formed of 24 Councillors representing eight wards in the town who are elected every four years. They set the budget, decide the strategy and actions and how money is spent. Each May a mayor and deputy mayor is elected. The mayor is the town’s first citizen and its ambassador at public, civic and ceremonial events.

Council meetings are still held at the Town Hall and are open to you to come along. We have a 30 minute open session at the beginning of our meetings when you can raise issues and ask questions.

In 2019 Chippenham Town Council also set up a Youth Council to engage with young people in the town and involve them in the democratic process to inform and influence decisions that affect their lives. 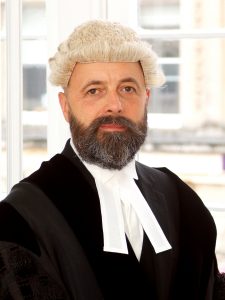 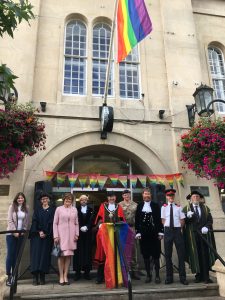 Before 1835 the Bailiff acted as treasurer and manager of the land belonging to the borough, the profits from which were divided amongst the Burgesses.

The Bailiff was chosen from the among the Burgesses forming the council.

Burgesses were the freemen of the town who were entitled to practice a trade and to elect members of the town’s ruling council. They could also occupy the Burgage houses, which lined the High Street and Market Place. The Burgesses would choose the Bailiff from their number.

Under the reform act the role of Bailiff was replaced by that of Mayor. The title ‘Mayor’ is used for both men and women.

The Mayor is a member of the council and is elected by their fellow Councillors serving for one year. The role has, however, become increasingly ceremonial with the mayor carrying out civic duties and chairing council meetings. For civic functions the mayor will wear scarlet robes representing authority from the Queen. The mayor is the town’s first citizen and its ambassador at public, civic and ceremonial events.

After the 1835 reforms, Councillors replaced the role of the burgesses, and became an elected position voted for by rate payers.

Today members of the council are all elected representatives of the community serving a four-year term of office. At Civic events they wear navy blue robes and bicorn or tricorn hats.

After the 1835 reforms, Aldermen were appointed to the council by the councillors. The post of aldermen or ealdormen dates back to Anglo-Saxon times when high-ranking officials of the crown exercised judicial, administrative, or military functions.

The office of alderman was abolished in 1974 due to the undemocratic way in which the position was appointed.

The post of Town Clerk has existed in Chippenham since the 16th century. The clerk was responsible for attending all meetings and recording the proceedings. The post holder received a salary and was annually appointed by the bailiff and burgesses, from within their own number.

The post became more defined under the 1835 reform act that required all councils to publish their financial accounts, which could be audited. The Town Clerk assumed the role of treasurer, previously held by the Bailiff. Town Clerks had to remain impartial and non-political and were to be appointed from outside the council members.

From the 1970s the responsibilities of the Town Clerk had increased with the growth of the councils and many felt the title no longer reflected their managerial role. Many larger councils have now replaced the title of Town Clerk with that of Chief Executive Officer

In honour of the historic origins of this now very modern post, the Chief Executive Office continues to wear the traditional black robes and wig worn by former post-holders. These are reminiscent of those worn in the judicial system, and are though to highlight the impartiality of the post.

We hope you’ve enjoyed your visit to this Online Exhibition. Please leave a comment in our virtual Visitors Book.